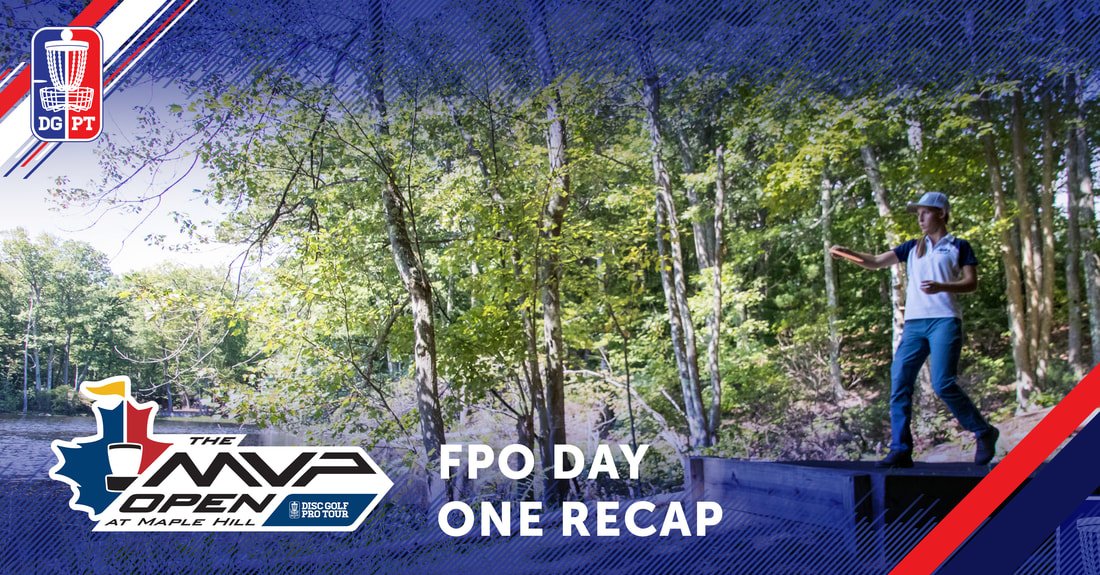 The first day of the MVP Open at Maple Hill is in the books for the FPO division, and the scores are close at the top. With five major names at the top of the field, it is still anyone’s event to win with 36 holes of golf left to play. Let’s dive into the round and see how our top five players and a few others faired on the Maple Hill course.

Two at the Top

Sarah Hokom and Paige Pierce finished the day tied at -2 sitting two throws ahead of the rest of the field with the lead. The two players had two different routes to the top though ultimately they converged on hole seventeen where they both birdied both it and 18.

Sarah Hokom played par golf to start the day. It was not until hole six that she faltered, going OB on her drive. Sarah went to work quickly offsetting the blemish by parking hole 8 for an easy birdie. Sarah would take one more bogey on hole 11 before turning on the heat on the back nine. Sarah finished the day 2 for 3 for birdies on the water holes at Maple Hill, parking her drive on 14 as well. Sarah’s run at the end of the round (Holes 16-18) vaulted her from one over to two down where she now shares the lead with Paige Pierce.

Paige Pierce started off the day with a birdie on the daunting hole one. She proceeded to struggle for most of the front nine. On Hole 6 after another misfire off the tee, Paige Pierce remarked, “It looks like it will be scramble golf for me today.” At this point in the round, Paige had scrambled on all but the first hole. A comment like that is not something you would expect to hear from the reigning tournament champ. However, it is important to remember Paige had to charge back in the final round last year to bring home the victory. Paige was able to calm things down on the back nine and birdie five of the nine holes in route to gaining a share of the lead alongside Sarah Hokom on hole 17. With an easy drive and upshot on 18, Paige was able to maintain her share of the lead -2 ahead of the field after day one.

The three-way tie for second

Catrina Allen kept it clean on the front nine, carding an even par through the first nine holes. Hole 10 saw Cat’s first bogey, but she quickly returned to even par with a birdie on 11. Cat would briefly take the lead with a death putt birdie on hole 14 but then on the next hole carded a bogey to go back to even par. Catrina had the furthest drive on her card on 15 but was unable to capitalize on the putting green. After the card had made their drives on 15, they had to wait while the card in front of them teed off on 16. The wait ended up being quite some time, and the players on the card remarked about how the cooling off ultimately affected their putting on the green. While Cat carded the bogey on 15, she was able to keep it clean through the end of the round and finish at even par.

Rebecca Cox also had her own unique path to even par today. Rebecca started the day with the lead and maintained the lead until Hole six where she went OB and ultimately finished three over for the hole. The rest of the round Rebecca traded birdie for bogies, needing birdies on holes sixteen and seventeen to come back down to even par. Rebecca played hole eighteen for par, and that is where she finished for the day.

Paige Bjerkaas started on an earlier tee time and carded six birdies on the day, sadly it was offset by six bogies. Paige started slow but was able to put together a string of birdies on holes 8-10. Her most impressive birdie came on hole 16 where she landed the putt from the middle of circle two. Paige had a look for the lead on 18, her drive made it within 100 ft of the basket. She threw a sidearm approach to the island green which hit the wall and took an unfortunate roll OB. Paige would finish the round with a bogey, putting her at even for the day.

Also on Paige’s card was Holly Finley . Holly is currently 2nd in C2 putting. Holly landed two C2 putts early in the round, but her most impressive putt on the day came on hole 15. On hole 15 Holly had a throw-in from 126ft out which is currently leading for the furthest throw in of the tournament.

Teeing off first this morning was Ellen Widboom . While Ellen had a rough round this morning, she had one for the highlight reel on hole 8 where she landed her putt for par from the drop zone.

Also making waves today on the course was Lykke Sandvik . Lykke was leading the tournament after the front nine but was not able to find her pace on the back. She just joined the PDGA in 2017 and according to some posts online has only been playing since then. However, she practices daily, and that practice paid off for the first half of the round this morning. It was clear that Lykke was enjoying herself on the course while working to stay focused on the task at hand. She looks to be an up and coming disc golfer to watch moving forward.

It is shaping up to be an exciting finish to the Pro Tour regular season. You will not want to miss out on the FPO coverage which starts at 2 PM ET each day here at the MVP Open at Maple Hill.