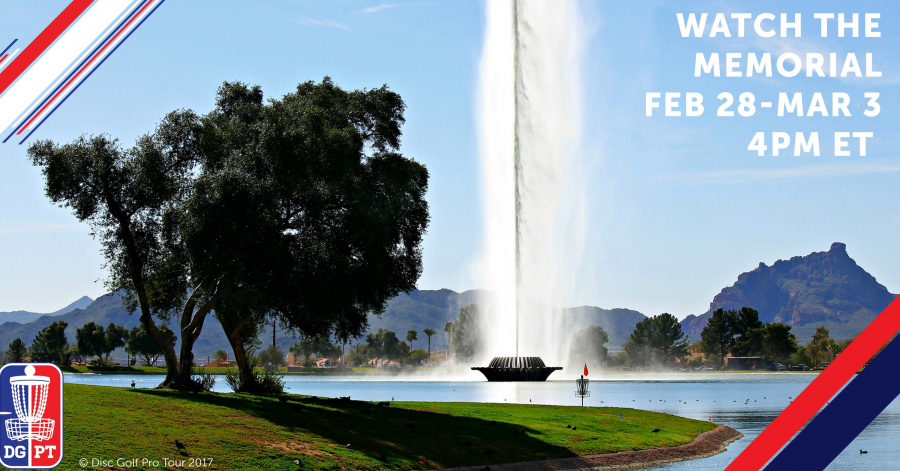 The day we’ve all been waiting for has finally arrived. We’ve reached the end of February and that means it’s time for the first stop of the third season of the Disc
Golf Pro Tour: the Memorial Championship presented by Discraft. Most of the best players in the world will be descending upon two iconic courses, Vista Del Camino, and of course, the ever majestic Fountain Hills.
Tournament Director, Keith Murray, and his team made the call to remove Fiesta Lakes from the rotation of courses this year. In my opinion, a great call given the caliber of the players registered for the event and its status as  Disc Golf Pro Tour Stop. That’s not the only change though, the final round is leaving Fountain Hills and headed over Vista Del Camino. Those green grass fairways and leaf filled trees are a sight for sore eyes to those of us still slogging through the snow to get a round in.
The Memorial always brings in some of the biggest names in the game in both the MPO and FPO divisions to tee off the season right. There are plenty of players to watch this weekend, but I’m putting my money behind Ricky Wysocki and Paige Pierce to take top honors. How can you pick anyone else? They are both 2017 World Champions and they are both 2017 Disc Golf Pro Tour Champions. Paige is also the defending champion of the Memorial.
Other names to watch for the weekend in MPO include defending Champion Paul “McBeast” McBeth, Simon Lizotte, Eagle McMahon, and anyone else who can throw a country mile will have an advantage. The course length at Fountain Hills comes in at just under 7000 feet, boasts a par of 56, with only two par fours. Vista Del Camino, where the victor will be decided on Saturday, March 3 rd , measures up at 8525 feet and par 60. That means the average hole length for the tournament is over 430 feet. On the FPO side, we should see some of the classics, Paige Pierce, Catrina Allen, Sarah Hokom and Jennifer Allen but don’t be surprised to see impressive showings from the likes of Jessica Weese or Lisa Fajkus.
The Memorial Championship presented by Discraft starts on Wednesday, February 28 th and will include four rounds, starting at Fountain Hills and alternating with Vista Del Camino. Live coverage starts every day at 4 PM EST and post-production rounds being posted the next day by both Jomez Productions and Central Coast Disc Golf. Don’t miss any of the action and make sure to check back here daily for more previews, stat analysis, and round recaps. Until then, get outside and play some disc golf! The 2018 Season is officially here!