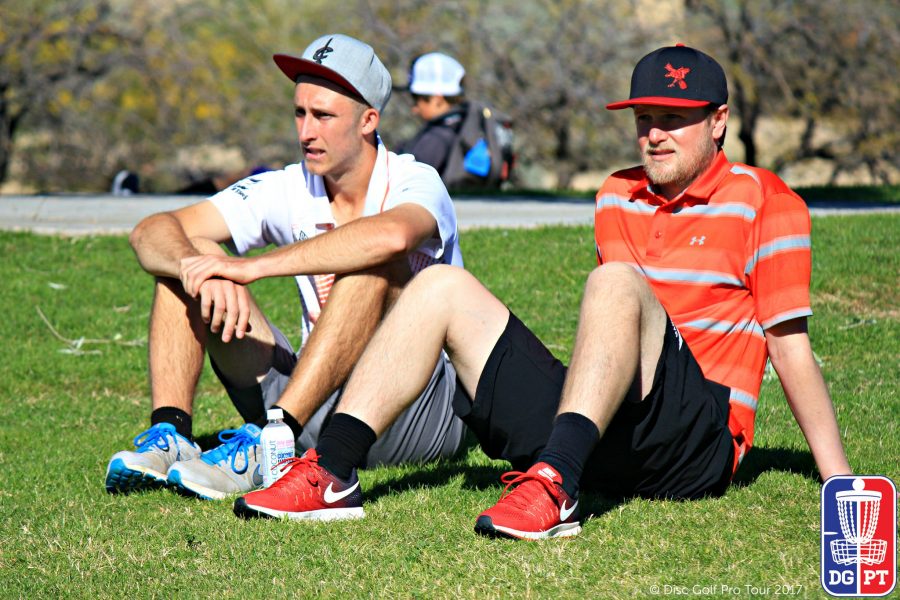 The 2018 Pro Tour season is officially in full swing and the MPO division did not disappoint today. Half of the field is under par and there are five players at the top with a ​
-10. Another fourteen players are within 2 strokes. There are many ways to get to a -10 at Fountain Hills so let’s dive into how we now have five people tied for the lead.
JohnE McCray
JohnE was one of our fan vote players who barely missed out on making it onto a feature card today. He made up for it by carding a birdie on the first hole and after taking a bogey on holes two and five cruised to a ten down by birdieing ten of the next thirteen holes. After a rough first day in Vegas last weekend, JohnE set the pace here in Arizona and will be leading off the box tomorrow afternoon.
Nikko Locastro
Nikko started the day hot and was on pace to try and give McBeth’s 39 a run. Nikko cooled down a little bit on the back nine but was able to maintain his share of the lead even with one misstep. Going into Hole 18 Nikko was -11. His drive sailed past the basket and OB. He was able to clean up for the 4 and will be going live with the rest of the lead card at 4pm ET.
KJ Nybo
KJ shot a relatively even front and back nine his only bogey took place on hole nine. KJ, much like the other players who shot ten down, had a really great front nine and then cooled off on the back nine. We know that all of our friends over in Denmark will be excited to watch KJ play on the lead card tomorrow out at Vista.
Ricky Wysocki
Ricky was on the feature card this afternoon after being the 2017 Pro Tour Points Champion. He put on a show that also included only one bogey. Ricky’s bogey came on hole 14 when his drive went long and bounced OB, ultimately rolling all the way down into the lake. Ricky had a shot for the lead on 18 but his inside the circle putt came up just short and hit front cage. Ricky will be looking to separate from the pack tomorrow but with a five way tie for the lead that could prove to be difficult.
Teemu Nissinen
Teemu is the last of the five who are tied for the lead and will be leading off the chase card tomorrow. Showing there are more than four ways to get to -10, Teemu was the only person who shot -10 to birdie the first three holes. He was also the only one who had a better back nine than front nine. While our Finnish disc golf brother is on the outside looking in for tomorrow’s lead card, he will be one to watch on the next day coverage to see how he builds on the lead he is sharing today.
These five players set the pace for the rest of the 180 person MPO field here at The Memorial. There are plenty of other names in the hunt with fourteen players within two strokes including: Simon Lizotte, Eagle McMahon, Eric Oakley, Nate Doss, Bobby Musick, Josh Anthon, Paul McBeth, Austin Turner, and Matt Dollar to name a few. With this many players so close in score we are setup for an exciting second day and the first round just ended.
Make sure you are ready to watch second round coverage of The 2018 Memorial Championship presented by Discraft starting at 4pm ET!