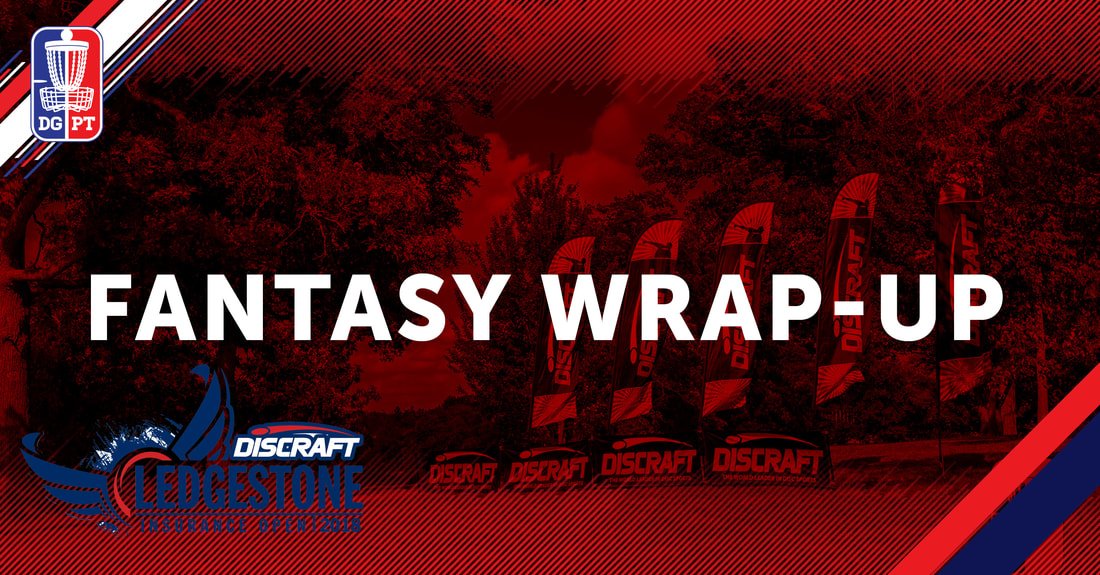 The Ledgestone Insurance Open presented by Discraft is in the books, and this means another set of fantasy disc golf winners. We are yet to see a perfect set of picks this season, but there is always hope for the MVP Open in two weeks. We will start this week with the free DGPT fantasy group where only two of the top five correctly picked Nate Sexton as one of the top four finishers.

In first place this week was kevinturner73. Kevin chose Nate Sexton, Cale Leiviska, Michael Johansen, and James Conrad in the MPO division. In the FPO division, he chose Paige Bjerkaas and Jessica Weese to help net him 78 more points than second place. He will be taking home an Upper Park drawstring bag for his efforts.

In second place was a winner from across the pond Tuomas Ryynanen. He chose Paige Pierce and Jessica Weese in FPO and followed those picks up by choosing Drew Gibson, Kevin Jones, Cameron Colglazier, and Philo Brathwaite as his MPO picks. Tuomas’s picks gave him 15 more points than third, and he will be taking home a DD Umbrella.

In third place was a familiar name (for fantasy wins) in Ryan McMath. Ryan chose Paul McBeth, Cale Leiviska, Cameron Colglazier, and Matt Dollar in the MPO division and Sarah Hokom and Paige Bjerkaas in the FPO division. He barely edged out fourth place by four points this week but will retain sole ownership of the third-place position in this week’s free league.

In fourth place was another familiar name, Gowland. Gowland chose all but two of the same picks as McMath. In the MPO division, he chose Nikko Locastro instead of Matt Dollar which lost him 44 points, but he chose Jessica Weese instead of Sarah Hokom which gained him 40 points back leaving the four point difference.

Wrapping up the top five this week in the free league was Michael Schwebs. Michael was the other person in the top five who chose Nate Sexton. However, he was unable to pick enough of the top winners to finish any higher than fifth. His other picks included James Conrad, Kevin Jones, Nikko Locastro, Paige Pierce, and Paige Bjerkaas.

The Patreon league yet again lost ground to the free league. Andrew Young led off the top of the Patreon league with 1052 points. Andrew chose Paul McBeth, Gregg Barsby, Nate Sexton, and Kevin Jones in MPO along with Rebecca Cox and Sarah Hokom in the FPO division. Andrew will be going home with a Grip Series B Bag for his top picks.

Dropping down 51 points we find Adam Kubiak in second place with 1001 points. Adam chose Ricky, Paul, Drew, and Schusterick for his four MPO picks and Sarah Hokom and Paige Bjerkaas for his FPO options. He will be going home with a Latitude 64 E2 Bag for his efforts.

Taking home third place in the Patreon league was Luke Berthot. Luke chose Nate Sexton, Philo Brathwaite, Michael Johansen, and Joel Freeman in the MPO division. In the FPO division, Luke went with Paige Squared as his picks which netted him more points than three of his MPO picks. Luke now has a free pair of KEEN shoes thanks to his efforts.

Only two points behind Luke was Eric Busch. Eric chose strategically in FPO with Rebecca Cox and Paige Bjerkaas so he could load up his MPO picks with Paul McBeth, Chris Dickerson, Ricky Wysocki, and Drew Gibson. He will be taking home a Grip C Series bag for his efforts.

Rounding out the top five was Juho Ahveninen. Juho went with Sarah Hokom and Rebecca Cox in the FPO division and followed those picks with Paul McBeth, James Conrad, Garrett Gurthie, and Kevin Jones in the MPO division. His 991 point finish landed him a set of 2016 Bobble Heads.

That wraps everything up for fantasy disc golf this week. We only have two more events left of fantasy disc golf for the season. It has been an exciting season, and we expect no less from the MVP Open and the Tour Championship. Make sure you have your picks ready for the MVP Open by August 24th at 6am ET . You will not want to miss out on these awesome prizes!