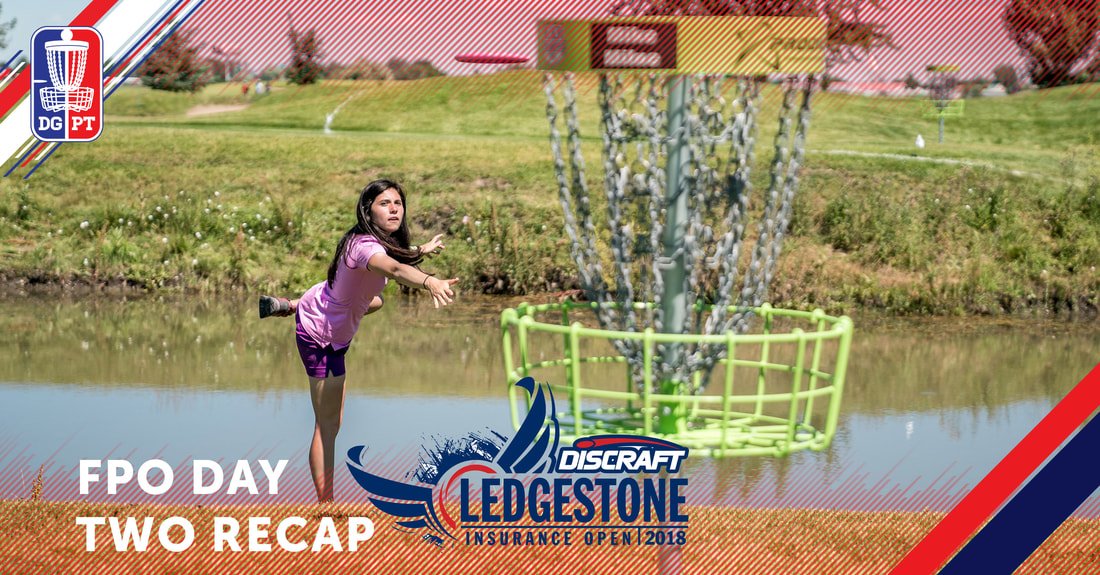 2018 Ledgestone Insurance Open: Players Jockey for Position During Round Two

​ The second round of the Ledgestone Insurance Open presented by Discraft presents a second course to the FPO division. Today the FPO division moved to Sunset Hills, where the scoring opportunities abound on the par 59 multipurpose ball and disc golf course.
Early this morning saw Kona Star Panis making moves from way down the leaderboard when she started her day -3 thru five, carding birdies on one, four, and five. Also on an earlier tee time making moves was Ellen Widboom. Ellen started the day +7 and finished at +4 throwing a -3 at Sunset Hills. She moved up 10 spots on the day and is in an excellent position to make even more moves at Northwood tomorrow.

The day started slowly for Paige, Jessica, Paige, and Cat. The mood was somber as the card had to make some close OB spot rulings on holes three and four. However, with the first four holes behind them,  the real scoring began. On hole seven the mood lightened when after Catrina and Jessica had putt there was a discussion on who the next person to putt should be. Jessica said, “I think Paige is out.” All that was left to putt were Paige Pierce and Paige Bjerkaas. After laughing about the scenario, Jessica indicated that she still thought Paige [Pierce] was out and she lamented about how she really set herself up for that to happen. After Pierce’s putt Bjerkaas stepped

As the card made the turn at the back nine Catrina was sitting in first, but Paige Pierce began putting together a run at the lead. On hole 12 Pierce landed a birdie two from just outside circle two to push herself into the lead. However, Paige’s run found a set back on hole 14 when she four-putted carding a seven for the hole.

While Pierce was making her run at the lead, Bjerkaas was waiting in the wings to swoop in for her time in the spotlight. Holes 13-15 Bjerkaas put together a string of birdies that could have been four had she not had her putt chain out from the edge of circle one on sixteen. Bjerkaas landed the birdie on seventeen and finished -5 for the day, -6 for the tournament and leads the division by two.

Other notable mentions on the day include Missy Gannon and Rebecca Cox who made moves from the chase and third cards respectively. Missy finished the day -3 at Sunset moving her to -2 for the tournament and securing a spot on the lead card going into round three. Rebecca also threw -3 on the day and has a place on the chase card tomorrow.

It was an exciting day at Sunset Hills and tomorrow will be even more engaging as players look to make moves on moving day at Northwood. As always you can catch the FPO shot-by-shot coverage starting at 3 PM ET .