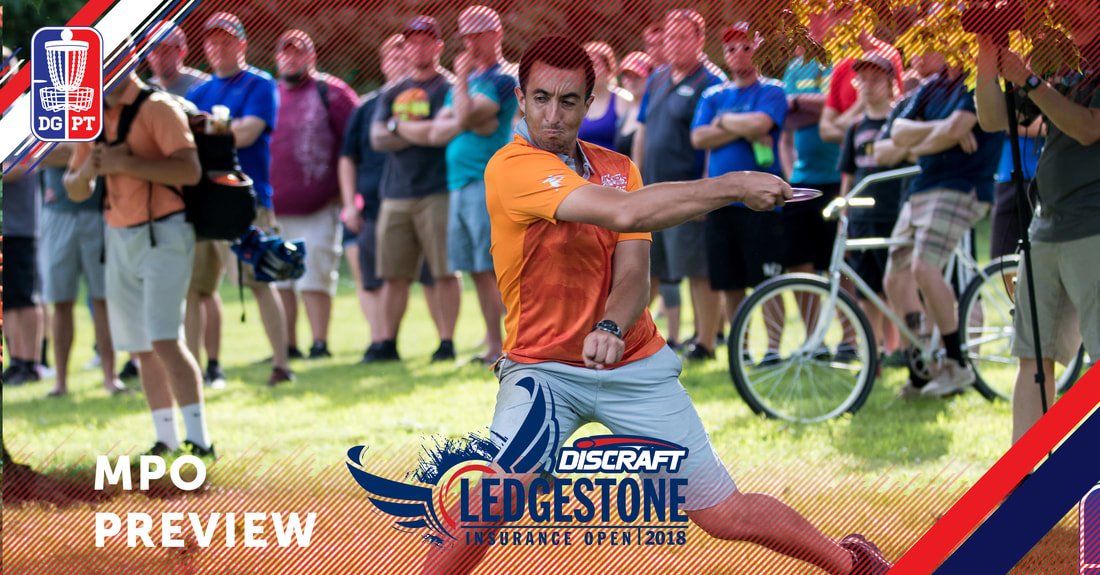 Before we jump into things in the MPO division, just spend a few minutes remembering all the amazing drives we saw last year:

​Totaling over 9600 ft, the par 63 layout will challenge the very best. Last year Josh Anthon blew the competition away, winning by 10 throws at 33 under par, over McBeth who finished in second place at 23 under par. That’s just what happens when you have just shy of 1070 golf for four days in a row – you become uncatchable. At the time, Paul McBeth was the highest rated player of all time and he averaged his own rating at 1052! Josh was absolutely on fire. When I did that math I thought to myself, “where has Josh Anthon been in 2018?” So I looked into it.

Anthon has been playing of course, but he has been absent from a number of DGPT events. If we compare his season stats (including events covered by UDisc outside of the pro tour) to his play at the 2017 Ledgestone some patterns show up that tell a story about Josh and about the division this year.

​Compared to his performance in Peoria last year, Josh Anthon is underperforming right now, but not by a huge margin. And unfortunately, comparing his 2018 Season Stats to his 2017 (above) shows that Josh has been struggling to put together the kind of play he managed last year this year. Hopefully, returning to the site of a previous victory will bring out Anthon’s best and we’ll see him playing on the lead card on Friday. Check out our Stat of the Week Article for a deep dive into what Josh needs to bring for a repeat victory at Eureka.

“Turbulence at the top” would be a good short summary for the MPO field this year. Yes, Eagle McMahon is shredding, and there are a ton of new names making lead cards, and a couple more old names making their returns. Don’t get too far ahead of yourself without checking the scoreboard though, Paul McBeth and Ricky Wysocki, the contemporary clash of champions, are still holding down 1st and 2nd in the DGPT Standings this year. Paul is at 450 points, Ricky is at 388, and James Conrad is in third at 324.1 points. With only two events left these top guys will have to stumble if anyone wants to catch them. So what does it take to be in first place? Let’s check out Paul McBeth’s 2018 DGPT Season stats:

Paul McBeth 2018 DGPT Season Stats
​Compared to Josh Anthon’s play at the Ledgestone Insurance Open last year, Paul matches almost every single stat, falling just short of only a few. Josh’s performance in 2017 was staggering when it happened, and likely anyone who plays that well this weekend will win. This year, the crowd of players capable are hungry for their chance. They’ll need some luck though, Paul seems to be finding McBeast mode again this year, claiming three of the last four DGPT events. Perhaps most prophetic of his play this weekend was his play at Idlewild. Although Eureka does offer some more airspace, it’s best to have your control game on lock for Heinold’s devious OB lines and the lakes treacherous shores. Plus, a little extra air space won’t hurt Paul, the guy can absolutely crush a sky anhyzer with stunning accuracy.

To me, Paul seems the player to beat right now, despite Anthon being the defending champion. He finished second last year and there’s probably no one on the tour more driven for first or nothing than Paul. Last year he played great, just not great enough to catch a surging Anthon, this year I’m sure he’ll come ready. Oh and if you had forgotten about this one, just watch this clip one more time (or a handful if you like) before Thursday.

Make sure you don’t miss the action stating tomorrow at 4 PM EST when the Feature Card of the MPO division will take on the Lake Eureka Course for the first of four rounds. We’ve got Austin Turner, Ricky WYsocki, Josh Anthon, and JohnE McCray for your viewing pleasure. Until then, I hope you get a chance to beat that Wednesday heat with a nice cool evening round!