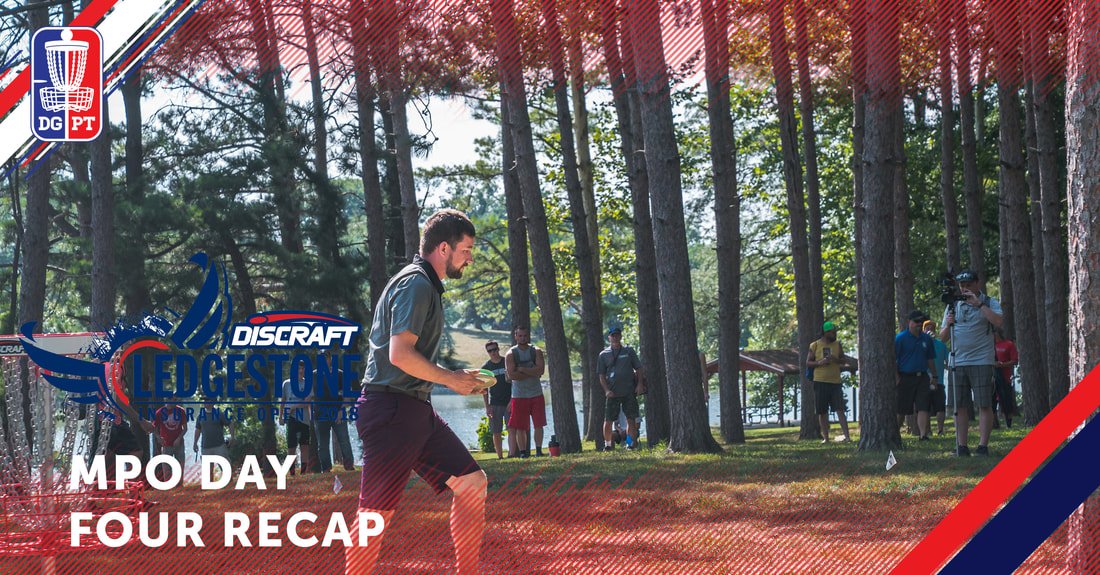 2018 Ledgestone Insurance Open: MPO Final Round Recap – Sexton was Due, and Sexton Delivered

​Wow. When we started today A.J. Risley held the top spot at 21 under, behind him by three at 18 under par was the rest of the lead card – Nate Sexton, Chris Dickerson, and Reid Frescura. By hole 5, the tides had turned, Chris Dickerson had moved into first place and A.J. had taken his place in the three-way tie. And that was just the beginning. At the end of the day, Nate Sexton got to lay up from inside Circle 1 to take first at 28 under par. Chris Dickerson finished in second at 26 under par, Reid Frescura finished in fourth at 23 under par, and A.J. Risley finished in sixth at 21 under par. Keep reading to find out how everyone got jumbled up.

After winning USDGC last year with a layup to a tap-in Nate Sexton has had a slow season, until now. Today marks Nates first win of the season, so it must be nice knowing that it comes with a historic payout. Congratulations Nate. Like a true seasoned veteran, he started a few back on the lead card and threw the only 100% scramble on the day. 10 birdies, 10 under – that’s what experience, precision, and extreme mental fortitude look like at Ledgestone. 96% inside Circle 1, 21% from Circle 2 helps you put another notch on the belt too. Check out his drive on 17, is there really anyone better with a Firebird than Nate Sexton?

Hole 17: Status – Parked. The final round of the Ledgestone Insurance Open presented by @discraftdiscgolf has been an exciting one. You can catch the tail end now http://www.dgpt.com/watch

Chris Dickerson deserves plenty of congratulations too. He started the day tied with Sexton and headed into 18 he was only one behind. After absolutely smashing his drive, he lined up a forehand that looked like it would neatly snuggle up against the edge of Circle 1 uphill of the basket, his disc stood up and rolled almost 60 feet to the lake and jumped right in. That roll cost him his chance at a Circle’s edge putt for the tie. Nate was no slouch though and had left himself the same. At the end of the weekend Chris played incredibly, including managing a 50% rate from Circle 2. Who does that? This guy does – check it out:

Hole 16: After goin OB @cdick1322 nails the C2 putt to save par. Tune in now for final round coverage of the Ledgestone Insurance Open presented by @discraftdiscgolf http://www.dgpt.com/watch

Risley’s round didn’t start hot, but after he parked his approach on the absolutely huge 897 foot Par 4 Hole 6 for a drop-in birdie after he just lost the lead to Dickerson. Following that up with another drop-in birdie on 7, it seemed A.J. had shaken off jitters and was ready to defend his initial position in first. Sadly, that wouldn’t last to even the back nine. A.J. will never forget hole 9 of the final round of the 2018 Ledgestone Open. That bridge and the tight green will always linger. After three OB penalties, Risley finally made the green and finally stemmed the bleeding with a tester of a 27-foot putt. With a quintuple-bogey 8, Risley fell over ten positions and watched his dreams of victory crumble. Risley was able to shake off the nerves, but not the throws. He finished the tournament at 21 under par in sixth place after throw even to par.

Cameron Colglazier is one of the many stories today. He played the day on the third card but finished in third at 25 under par after an 11 under round. He finished the weekend in 1st place for making circle 1 in regulation at 56% of the time. That must be nice. If he could have scrambled better than 41st in the field we might be talking about a different winner. Enough words and numbers though, just check out his nasty putt on 13 for birdie:

Hole 13: @cameron_hmd with the birdie from downtown. See if the lead card can catch him by watching the final round action from the Ledgestone Insurance Open live http://www.dgpt.com/watch

Wow. Wow. Wow. What a weekend. This is why I love watching the best players in the world take on the Lake Eureka Temporary Course set up by TD Nate Heinold and his team. What an absolute dream. All the players we talked about today didn’t even throw the hot round, those honors belong to Drew Gibson at 12 under par, the best round of the entire event. Congratulations to Nate Sexton, hopefully, this can propel him into some more wins as the season get’s to the biggest events of the year. In two weeks we will see you again at the Maple Hill for the MVP Open. You won’t want to miss it. Until then, get out there and play, and no matter how you do remember, you just had a great walk in the woods. Enjoy it!