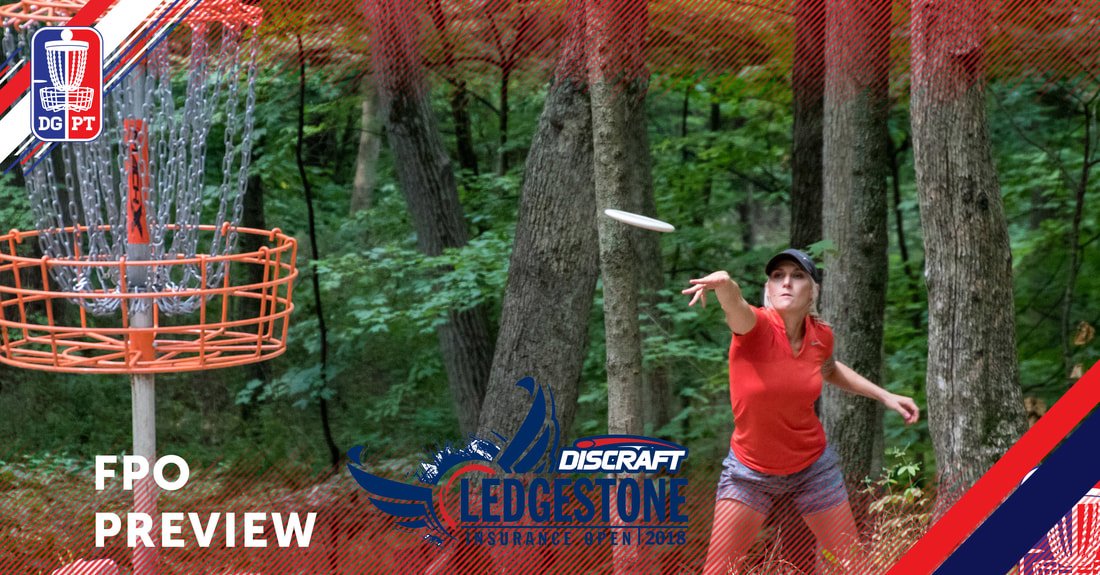 Looking at this year’s field compared to previous Ledgestone Opens there are a few differences worth mentioning. Last year’s champion, Valarie Jenkins is not signed up to defend her title this year, leaving the door open. Val played incredible throughout the weekend in 2017, but really made her money on some truly amazing putts, many of which you can catch in our Top FPO Putts from the 2017 Discraft Ledgestone Open:

With 2017’s winner missing, the title could be anyones. Looking only at past performances in Eureka the easy choice would be Catrina Allen, who notably didn’t make the top five last year (she did finish 6th though). Before 2017 though she won the event every time she signed up. She’s the only player who has won the event more than once with a total four victories. Catrina had trouble finding major victories early this season, but was almost always in the hunt, finishing second place three times this year and only a couple finishes outside the top five. Her tune has changed now as she has taken down the field a few times in the last couple months, including a playoff with Paige Pierce in Oregon. Catrina is playing well right now and Catrina historically plays well at Ledgestone, that’s a recipe for success this weekend if I’ve ever seen one. My Money is on Allen to become a 5-peat Ledgestone Champion this year.

Besides Val and Catrina, Sarah Hokom is the only other FPO champion of the Discraft Ledgestone Insurance Open in history and she is signed up to play again this year. It’s been seven years since she won though, so the excitement of returning to a venue you’ve won at before may have worn off a bit. Hokom’s 2018 season is nothing to scoff at though and it’s a safe bet that she will be a part of the hunt for first when tee times start on Thursday morning.

Lest we forget the prodigal Paige Pierce, though. She may have never won in Peoria before but that certainly doesn’t seem to stop her from picking up first-place finishes all season long. Sure, one could argue that she “stumbled” with her second-place finishes at the San Francisco Open and Beaver State Fling, plus a third-place finish in Finland. But if we’re willing to call Paul McBeth’s smoking hot 18 under a perfect round with that bogey blemish countered with an eagle, then surely we could let Paige off the hook with a brief bobble there. She picked back up in Kentucky, taking what will likely be the first of another long winning streak.

Paige (972), Sarah (958), and Catrina (955) are the only three FPO players rated above 950 playing this weekend so safe fantasy picks would be any combination of the three. But don’t count out the likes of Lisa Fajkus, Jessica Weese, Madison Walker, and a handful of other top pros that are right on the brink of joining the elite FPO players that we’ve grown accustomed to seeing atop the leaderboard.

You can follow live scoring on UDisc.com starting Thursday morning, and replay footage of the FPO division and live coverage of the MPO division starting at 3 PM Eastern. Don’t miss any of the action as the best in the world duke it out in Peoria, IL for the 2018 Discraft Ledgstone Insurance Open.