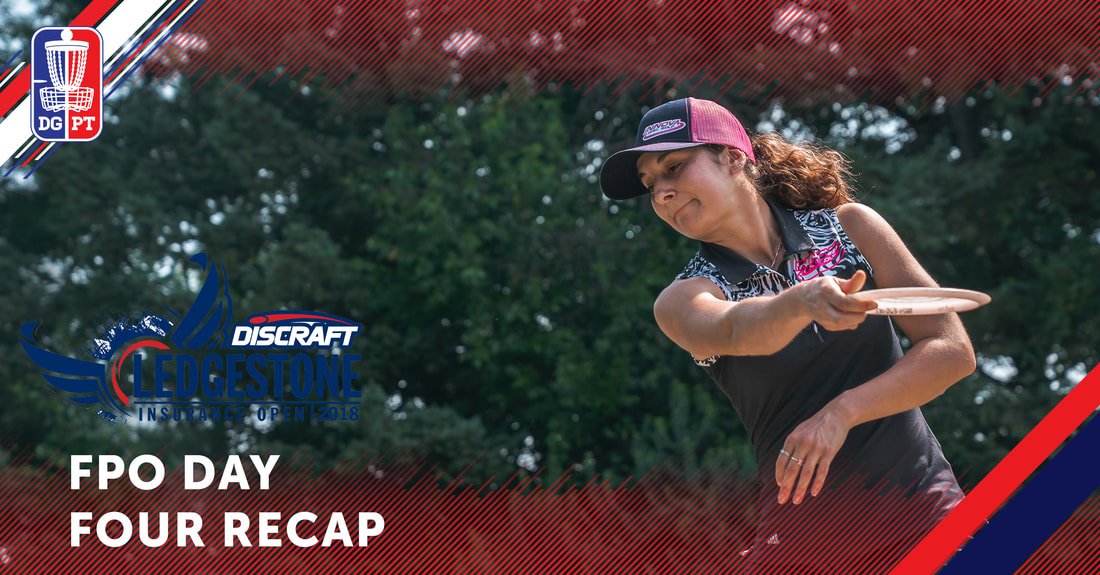 The title says it all folks. Jessica Weese, after three podium finishes this year, has clenched her first Pro Tour win of the season. Sarah Hokom put on a show of a hot round today at 7 under par, but it wasn’t quite enough to catch Weese who held the top spot after day three. Your top three finishers, with scores, were Jessica Weese at 15 under par, Sarah Hokom at 9 under par, and Paige Bjerkaas at 8 under par.

Jessica Weese started the day with a  four throw lead over the rest of the field. By hole 11 Sarah Hokom had a brief taste of a tie first place before the round swung back in Weese’s favor. From hole 12 on Weese extended her lead over Hokom with  5 birdies in a row, till yielding one final, inconsequential throw back on hole 18. Her round started a little bit slower than Sarah Hokom’s but she brought so much heat in the back nine, plus her four throw cushion, that she was ultimately uncatchable. She moved up to the top of the box after her solo birdie on 12 and held it until Paige Bjerkaas took it from the card for the final tee box of the day.

Hole 18: @discprincess looks to wrap things up here at the Ledgestone Insurance Open presented by @discraftdiscgolf. Tell your friends and tune in at 3 PM ET for the full round coverage http://www.dgpt.com/watch

Sarah Hokom was steady for most of the day as she meticulous picked apart Sunset Hills. Her hot start at four under for the front nine was the lowest score on the first nine holes all day. It helped that she scored a 138 ft throw in on hole 4 to start a four-hole chain of birdies. She was playing hot all day until her first real miss on hole 14, leaving her birdie putt just short off the cage as a spectator moved just behind the basket as she committed to the putt. With the battle so close, that birdie matter and the emotions on the field were understandably high. Like a true professional, Hokom bounced right back with a drop-in birdie on hole 15. Sadly, after her smoking hot start, Hokom slowed down in the back and by the end of hole 16, she was three behind with two to go – fairly improbable odds. With an OB penalty on 17, the door closed shut tight, sealing the deal on her second-place finish.

Paige Bjerkaas, who started the day tied for second, finished in sole possession of third, at a total 8 under par, but not for lack of a strong round. There was a heavy contrast between her front nine and back nine. On the front, she carded four birdies but also four extra throws between three holes to finish even. On the back, she landed 3 birdies and cleaned out the rest with pars, but for an unfortunate closing birdie on 18. It’s those four throws over par on the front nine that really kept Paige from a battle for second with Sarah Hokom. Bjerkaas is faced with a tough decision now, she is currently 9th in tour points before accounting for her Ledgestone finish. She is qualified for finals, but also registered for classes and needs to decide if she’ll stay on tour or continue pursuing her degree. After this weekend, that’ll be a hard decision to make.

Just off the podium was a number of familiar names that many expected to fair better at Ledgestone. Catrina Allen finished in fourth place at 5 under par, Paige Pierce in fifth at 3 under par, and a tied for sixth at 1 under par was held by Lisa Fajkus and Rebecca Cox. Today was also about a lot more than just this tournament though. With Hokom’s second-place finish and Pierce’s fifth-place finish, Sarah will creep to within 30 Tour Points of our Season Leader, Paige Pierce. That means it will all come down to historic Maple Hill for the MVP Open. Thanks for reading, and don’t forget to tune in for video replay of the women’s round starting at 3 PM EST and live coverage of the men’s round starting at 4 PM EST.