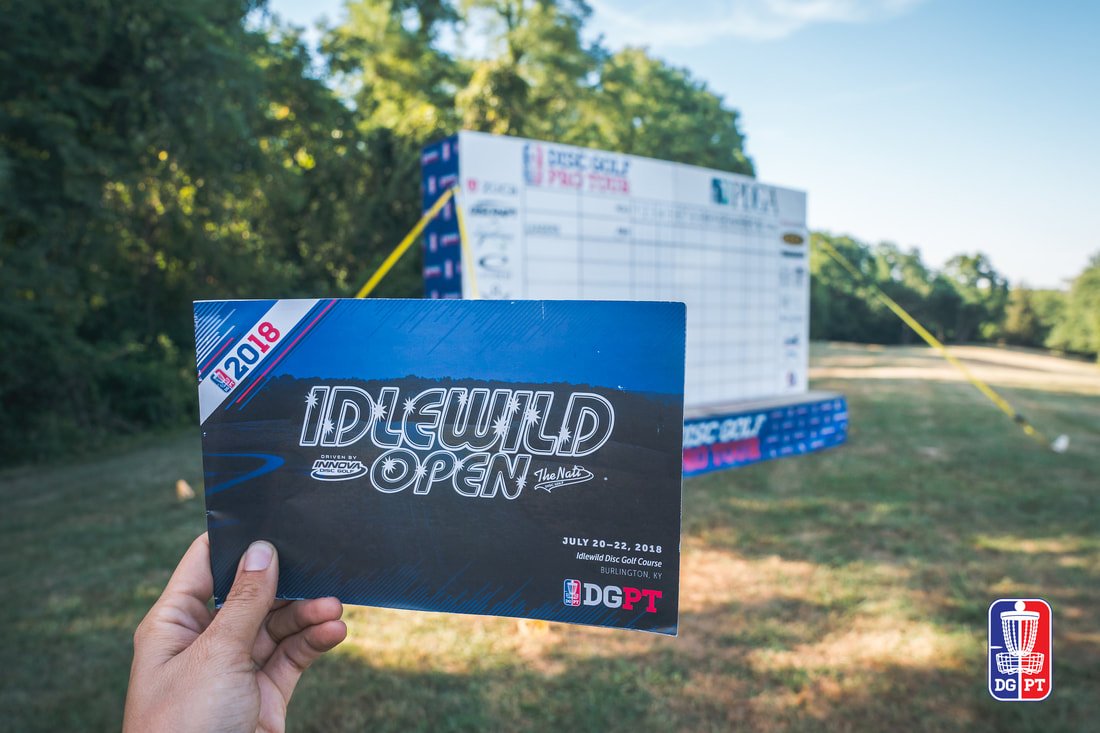 ​ The 2017 Idlewild Open is remembered as the event where James Conrad made a name for himself. Down the stretch he beat Paul McBeth, who was in high gear, earning the biggest win of his career.
Flooding, delays and a tornado warning headlined the 2018 Idlewild Open.

But nothing was going to stop the Nati from hosting their famous tournament at one of the top 10 courses in the country.

When I saw the weather on Sunday was going to be pleasant, I had to be there! I drove from my home in the Dayton, OH area and made my way to Idlewild.

Kevin Jones was sitting atop the leaderboard at 16 under par. Zach Melton was in second at 14 under, and everyone else was a few strokes away. But, sitting at the top of the chase card six strokes off the lead was Paul McBeth.

But before we work our way through the final MPO round, let’s take a look at the female competitors.

Paige is back on top!

Paige’s key to victory was consistency. Her rounds were 68, 69, and 68. She hit the fairways and drained her putts inside of circle one.

With the mental fortitude we saw from Paige during this event, it is safe to say that she has bounced back from a few less than stellar performances.

Sarah Hokom found herself on the podium, taking home second place. Finishing 15 over par is an excellent score for an FPO competitor.

And rounding out the top three is Cincinnati native Rebecca Cox. Rebecca had a fantastic third round, which is what allowed her to keep her third place position.

When the chase card teed off from hole one, you could feel the anticipation in the air. Everyone seemed to know that we were about to see something special. When Paul let his destroyer rip down the 638 hole, it was on!

Through the front half, McBeth went eight under par. After 11 holes, Paul was nine under. Everyone in the gallery thought we were witnessing a possible 1100 rated round. At this point, a few blunders by current leader Kevin Jones, and a hot McBeast pushed him up into the lead.

And no one was going to catch him!

The back nine wasn’t as clean for Paul as the front. But he didn’t need it.

So I didn’t get to witness an 1100 rated round. But I did see Paul come back from a six-stroke deficit to win by four. That is Paul McBeth.

Slightly overshadowed were our second place finishers: Zach Melton and James Conrad. The 2018 Idlewild Open was the best performance we have seen from Zach Melton. He has won before. But a Pro Tour event is significant.

As mentioned Conrad was the returning champion. And with a surmountable deficit and a skill set that matches well with Idlewild, James was looking to repeat. And he had a great round! Conrad shot six under par and was perfect inside circle one.

Dropping a few spots was Kevin Jones. He struggles today, going two over par and finishing in fifth. But Kevin Jones is beginning to be a household name. If we keep seeing him on lead cards, he is sooner or later going to step up and get the victory!

The next Disc Golf Pro Tour event is the Ledgestone Open August 9-12th. We will see you there!