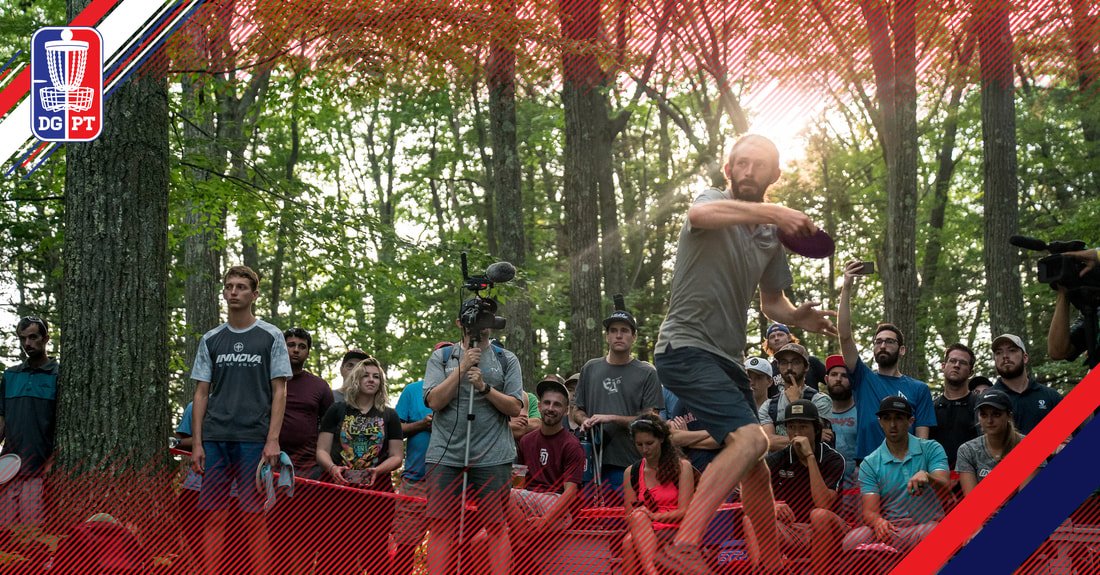 ​If we’re going to talk about James Conrad then we need to start at the beginning of the final round of the 2018 MVP Open. 11 down for the event, 3 back of the lead, and sharing the lead card with Ricky Wysocki, Paul McBeth and Calvin Heimburg, James was one hell of a hot round away from his first DGPT win of the year at the final regular-season event of the Pro Tour. A few hours later, James watched McBeth loft the tensest putt of the weekend. 80 feet, over OB, threading the iconic V-shaped guardian tree on Maple Hill’s eighteenth green, Paul’s putt passed just right of the chains and James could literally let his hair down. With his final drop-in putt, flow flowing, James took home over $3500, having played the highest rated round of his career – a 1098 rated 48 on Maple Hill Golds. Before you read any further go watch every edge-of-your-seat moment unfold in our replay live coverage:
​James played every single Pro Tour event this year. Finishing in the top ten 6 times, plus one 11th place finish (remember of the 9 events, only the best 7 are scored) makes him the first competitor on the Pro Tour Points podium that we’re highlighting. He’s not even 25 points behind Ricky (in second place) but his 471.1 points just can’t quite compare to Paul McBeth’s blow-out points win at 599 (we’ll get into that in just a few days!). In past previews, when we look at a player’s season stats we can usually see what their weaknesses and strengths are based on their stats. To make it to the Pro Tour Points podium is almost impossible without a well-rounded game. By the numbers, that’s exactly what Conrad is. He isn’t leading any stat category (his best ranking is 5th in Circle 2 Putts at 35%) but he’s top ten in 4 of ‘em and barely trickles out of the top 50 on the rest. Take a look:

James Conrad plays a perfectly rounded 2018 Pro Tour Season
​If you didn’t know or happened to forget, Conrad is this good while being self-proclaimed in the bottom 5 worst sidearms on tour. You’ll really only see him through a sidearm when things are looking dire and he’s literally out of backhand possibilities of any kind. Personally, I depend on having both a backhand and a forehand in every round so it’s hard for me to even fathom what it would be like to shape those shots and trust my lines as much as James trusts his. That is what James is rightfully known for – lacing lines, particularly in the woods. Don’t sell him short though, it’s not like he’s a slouch on distance or putting. I mean, he won toe putting competition at Worlds this year, and if you’ve ever been witness to his loping run-up and seen the torque from his throw make that beautiful hair momentarily weightless then you know he can absolutely crush. And he’ll do it with putter through the woods.

James Conrad’s 2017 Tour Championship Stats
Last year at the Championship James started hot in the finals but unfortunately fell off on the back with two bogeys and two double-bogeys in the last nine holes of the event. If you compare his stats from that even to this season’s then you can see that he’s coming in with a game that, on average, is statistically better than he performed at the championships last year. That consistency is going to be important heading into Finals. All of those bogey’s that got him in the final nine started from the tee with errant drives in all four cases. Before he can make it to the final round he has to win his seeded match against Garrett Gurthie and whoever battles thru for the other two spots on the card. Gurthie, like Conrad, is a backhand player too and when he’s playing well he earns his birdies from the tee pad. Conrad will want to have control of the box early otherwise he’ll have to follow one of the best throwers on tour on every hole. Not an order of play that’s likely to encourage confidence, especially when they’re facing down such a luscious and lengthy layout like New World DGC.

That’s gonna wrap up our preview for James Conrad. Last year he finished fifth for points and 10th in the Finals.  This year he’s made the Pro Tour Points podium so if patterns mean anything we can expect him to improve on last year’s performance as he only has 36 holes left to play on the 2018 Pro Tour. Well, 36 unless he’s in a playoff! It’s only weeks away so clear your calendars, text your buddies, and get ready to watch as the best players of the year compete for the crowing title.