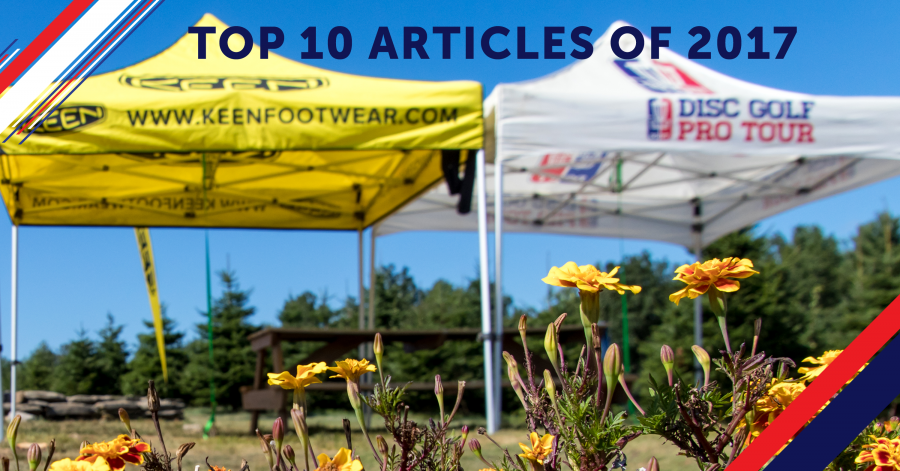 The sport is rapidly changing, growing, and expanding. It is an exciting time to be a part of disc golf. The Disc Golf Pro Tour is one slice of that excitement. In order to
make sure fans and followers of disc golf stay informed we release information here on our blog as soon as we can put our fingers down to type. This leads to some pretty popular news stories on our end. In the past year we have seen over 160,000 visits to our blog alone. As we look to 2018 we wanted to take a look back at our top ten articles as a way to remember all of the exciting things which happened out on tour this year.
10. Tour Championship Bracket Challenge For the 2017 Pro Tour Championship we decided to bring disc golf into the age of technology in regards to fan based interactive materials such as fantasy disc golf or a bracket challenge. Since the Pro Tour Championship follows a quasi-bracket structure we sourced a disc golf fan to create a bracket and then opened the door for people to submit their picks. It was a great way for those following at home to get involved and we look forward to expanding the ways fans can be involved in 2018!
9. 2017 A Good Time to Go Pro After 2016 we began to realize the significant impact the Pro Tour was having on the Professional side of disc golf. We sat down and did the math, and discovered that between the Pro Tour and the National Tour the payout for 2017 tour events was going to more than triple that of the payout from three years before. The beginning of the 2017 season was an exciting time for disc golf and we know 2018 will be equally as exciting!
8. Champion Bobbleheads With a growing tour comes a growing opportunity for merchandise. Just like our Pro Tour Playing Cards , which feature the top 50 men and the top 15 women, we created bobbleheads to celebrate the tour and points champions last year. People seemed to love them, to the point that our article about their release was one of our top ten most visited articles of the year.
7. Unreachable Greens After the first few events (and crunching all of the 2016 event data), Josh over a UDisc began to realize some differences statistically for how the women were playing certain holes vs. how the men were playing them. This data began to lay the groundwork for what would be our most popular blog article of the year.
6. 2017 Pro Tour Schedule The only article published outside of 2017 to make our top articles list. Probably because it detailed every stop we would make during the 2017 Pro Tour. We are glad to see so many people were interested in following our sport and we look forward to seeing the 2018 Pro Tour Schedule attract the same amount of attention.
5. Ricky Wysocki’s scoring error at The Memorial The Pro Tour has brought with it some great innovations to Professional Disc Golf. One of those innovations is the UDisc live scoring. In this article we detailed how had Ricky checked his UDisc score he might have caught his scoring error at The Memorial and ended up $1,000 richer. It’s an interesting perspective to take and one that has us considering the benefits of further integration of UDisc into the Pro Tour.
4. 2018 Pro Tour Schedule This is quickly becoming one of our most viewed pages. Why? Because people are excited for the 2018 season! We are too, we cannot wait to get back out on the road and see all of our top Pros in action. We are excited to see what stories develop and who emerges as the top competitor(s) of the 2018 season.
3. Paul McBeth DNF’s at Green Mountain In an uncharacteristic move, in the middle of round two of the Green Mountain Championship Paul McBeth withdrew from the tournament due to injury. This came as a shock to most, as Paul had done his best to mask the injury and play through it during both the first round and the first half of the second round. This shocking news created our third most read article of 2017.
2. April Fools! (Pulling out of Nick Hyde) Every year on April 1st blogs across the web compete to see what outrageous story they can post that people might actually believe all for the sake of April Fools. This year our April Fools stunt lead to the second most visited article of the year. We have not begun planning for this year’s April Fools, but now you know what we are capable of, so you can be prepared.
1. Women’s Tees At the Disc Golf Pro Tour we are constantly considering what it will take to grow the Pro side of the sport, both for men and women. One of the most interesting developments in the 2017 season was our realization for the need of women’s tees. This was something which was identified through stats compiled by UDisc (see article #7) and something we felt warranted to be discussed at length as the change was made. This resulted in our most read, and commented article of 2017.
Thank you for following the Pro Tour in 2017. We look forward to what we will accomplish together in 2018!