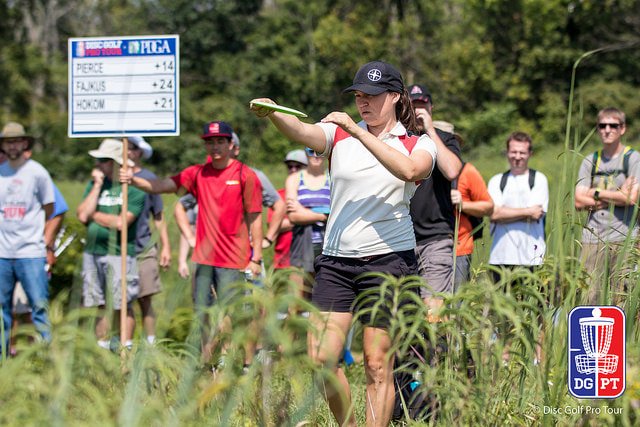 The day is finally upon us, after nine incredible pro tour events we have arrived at the very last, the 2017 Disc Golf Pro Tour Championships hosted by Prodigy Disc is
officially underway in Jacksonville, FL. Today we saw the FPO Quarterfinals – eight players battling it out for the opportunity to play again tomorrow in the semi-finals. On the course today was (in finishing order) Lisa Fajkus (E), Nicole Dionisio (+4), Melody Waibel (+5), Rebecca Cox (+6), Jessica Weese (+8), Tina Stanaitis (+8), Erika Stinchcomb (+8), and Courtney Cannon (+12). The top six players advanced to the semi-finals tomorrow, that does mean we bid farewell to Stinchcomb and Cannon though. Congratulations to both of them for making the Tour Championship this year, we hope to see you both back on the course next season!

Lisa Fakjus Quarter-Finals Stats
The New World Disc Golf Course gave these impressive players quite the challenge today. Lisa Fajkus shot the hot round, even to par. This is not your run of the mill “birdie-or-die” kind of tournament. Scramble matters on these days and a couple good circle two putts and beyond help too – Lisa is leading the pack for both. Not only did she find the chains four times from circle two, she also tossed a putt in from 73 feet for a birdie on hole 16. Despite a generous lead of four throws over the rest of the field today, Fajkus won’t be running away with the tournament. Each day scores are reset and it’s all about making the cut and getting into the final round.
In the rest of the group, there are some great stats to check out. Melody Waibel has the hot putter at 95% inside circle one, Jessica Weese has her drives on lock, landing in the fairway 86% of the time, and Nicole Dionisio is putting it right up on the basket in ranked first for parked drives and approaches.
Standing between all of today’s players and victory is going to be Paige Pierce, Sarah Hokom and Catrina Allen, the three top-ranked and rated FPO players in the world. Everyone has a chance when the scores are reset at the start of the round. Make sure to check back to see who can deliver under pressure at the New World Disc Golf Course for the 2017 Disc Golf Pro Tour Championship Semi-Finals hosted by Prodigy Disc tomorrow.
​