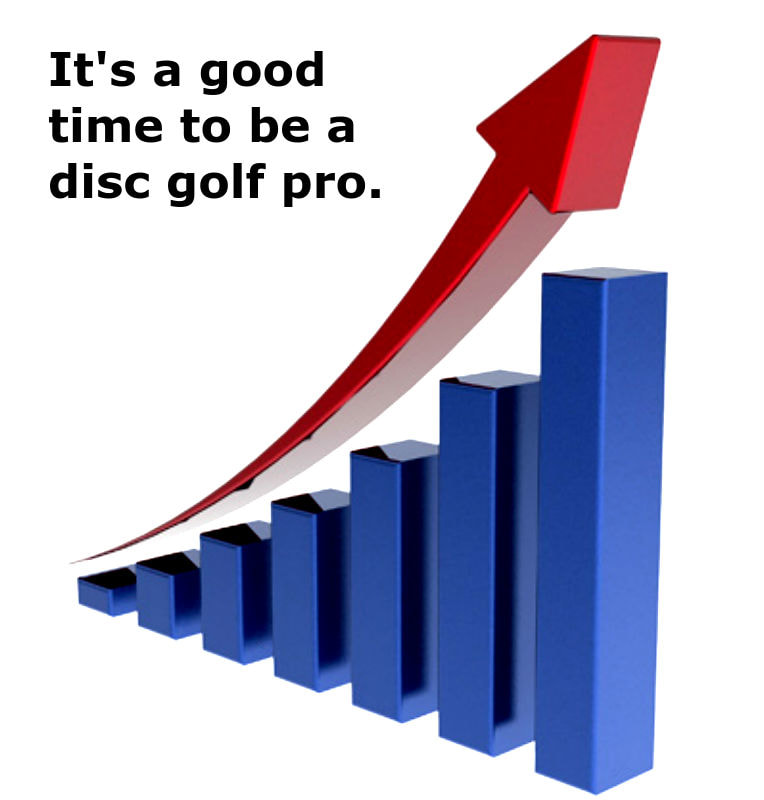 Payouts are increasing, viewership is increasing, player brands move products, and we are closer to a unified tour than ever. In 2016, we set the table. In 2017, we get to eat
Increasing PayoutOver the past dozen years, premier event payouts have been fairly stagnant. In 2015, the Ledgestone set a new gold standard for event payouts and started the payout growth. In 2016, the DGPT brought six premier events into the fold to join the PDGA NT. In 2017, we see how things are accelerating.

Just three years ago, in 2014, the NT payout (for MPO/FPO) was $215,000. In 2017, the Pro Tour payout alone will be around $500,000. The six NT events will likely add another $200,000. Combined, we will be more than tripling the NT MPO/FPO payout of just three years earlier.
All told, there are six NT events, ten Pro Tour events and four World Tour events. That is 20 premier events plus Pro Worlds. A few years ago, this number was a dozen. Plus, for the most part, the tours are working together on scheduling so it is actually easier to compete at these 20 events than it was to compete at 12 in 2014.
Additionally, the PDGA announced a 350% increase in payout to the National Tour points champions, now $35,000, while the DGPT announced that the added cash to the Pro Tour Points/Championship would increase by over 50% to $55,000. Lastly, both tours are paying $10,000 to the women’s side of the game in their championship payouts, making 2017 the richest year for women in our sport as well.
Increasing ViewershipWhile we don’t have any numbers on increasing viewership for the Pro Tour, the numbers of people tuning in are clearly increasing. Philo’s albatross got over 1,000,000 views on YouTube. Jomez , CCDG , Disc Golf Guy , Prodigy Disc , and Spin TV ‘s recap videos are garnering 50k and even 100k views much more often. As the players continue to improve, the venues get more and more scenic, and the video quality gets better and better, more and more people are tuning in (thank you!).
We will be sure to track viewership for the Pro Tour in 2017. Our videos had over 1,000,000 views in 2016. Our goal for 2017 is 3,000,000. Remind us of this in October! 🙂
Players are BrandsWhen Paul McBeth announced his partnership with Adidas and, as reported by Ultiword Disc Golf, sold hundreds of pairs of shoes over a weekend, many people took notice. This was a big moment in our sport, but there were many smaller events that got us to this point. As with any defining moment, without countless smaller moments it could not have happened. Ken Climo was the first disc golf player brand. Barry Schultz, Schweberger, Julianna, Des and many others followed.

Today, we could all name off a dozen players that we would love to meet and enjoy to watch. The players are successfully building themselves into a brand. Getting a Sockibomb, Big Jerm, or McBeast disc matters – as does getting a DGPT disc ! As this becomes more and more commonplace, it will naturally expand to products peripheral to our sport. I look forward to watching the next steps in this direction.
—–
21 premier events, $90,000 in tour championship payouts, 1,000,000 people watching a single disc golf video, growing player brands and a quasi-unified tour (in scheduling if not in name and payout). Is this the best year to be a pro? Is this the best year to watch the pros? Will 2017 see more growth in disc golf than ever before?
You’ll have to watch to see!
—–