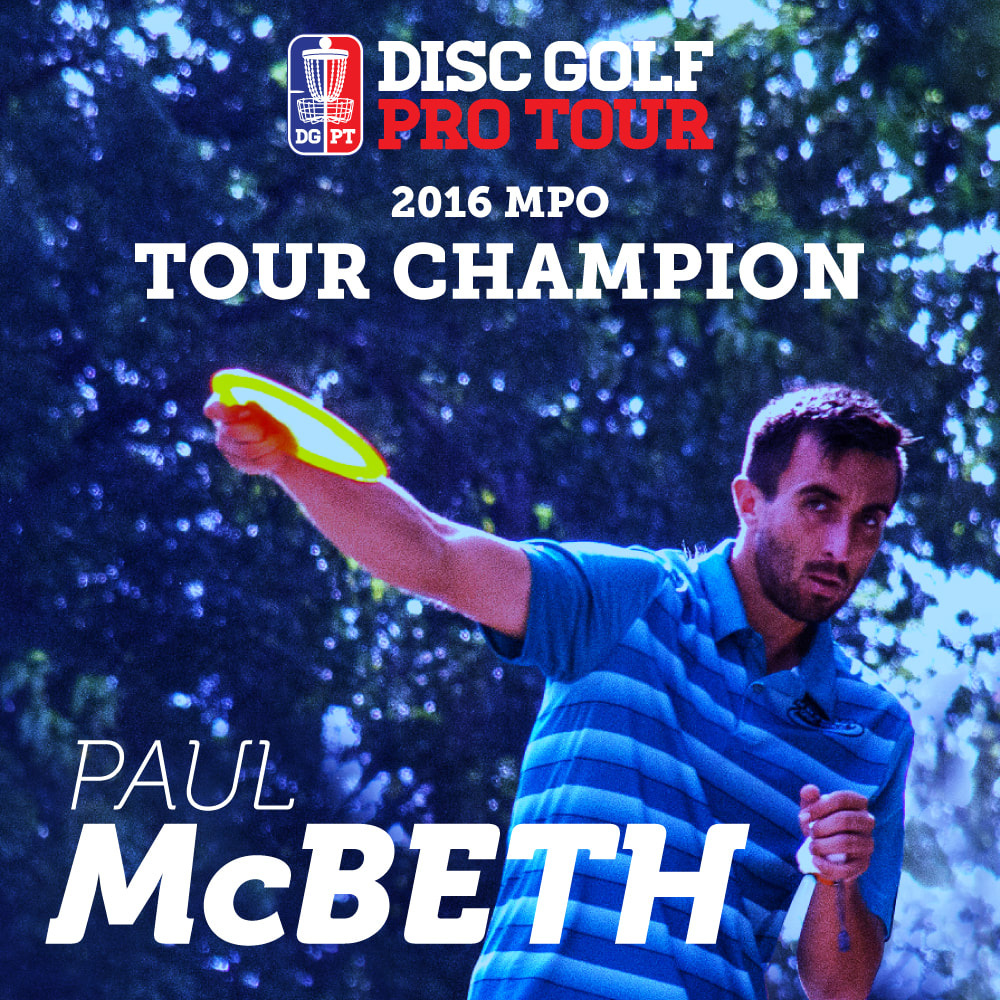 The Tour Championship is the final event of the Pro Tour season. It is our playoffs, our celebration, and the 2016 inaugural Tour Championship did not ​
disappoint. While the MPO Semifinals will be the round that everyone remembers as one of the most intense in the history of our sport, every round had its defining moments.

Catrina Allen and Paige Pierce jumped out to a quick lead in the Semifinals, however Paige suffered a triple bogey on hole 5, losing three strokes to Cat, and never recovered. The top four (Cat, Paige, Sarah and Val) would advance to the Finals. Paige, who lost by five to Cat in the Semis, would suffer a similar fate on hole 5, again throwing OB, this time losing two strokes.
Unlike the Semis however, Paige would fight back, carding birdies on holes 8 and 10 to pull into a tie for the lead. After trading birdies on 11 and 12, Catrina would put the match away with birdies on holes 13, 14 and 17. Two of the birdies were carded with huge putts in a critical situation. Catrina knows how to close out a tournament and ended up winning the inaugural Tour Championship by four.
Sarah Hokom birdied the final three holes to pull into a tie for second while Valarie Jenkins rounded out the top four.

On the men’s side, there were many more upstarts who wanted to throw their hats in the ring. In the Quarterfinals, four players who were well outside the top 20 in Tour Points (Jordan Castro, James Cole, Peter McBride and Dana Vicich) all shot well enough to finish in the top eight to advance to the Semifinals. They were joined by top 16 players Cam Todd, Drew Gibson, Paul Ulibarri, and Nikko Locastro.
These eight players, who bested players such as Jeremy Koling, Will Schusterick, Devan Owens, Eagle McMahon, Philo Brathwaite, Steve Brinster and a dozen more high powered players, would advance to the Semifinals. The MPO Semis is one of the most interesting rounds in the disc golf year, with each card winner and one wild card advancing to the Finals.
Semifinals Card 1: Ricky Wysocki, Nate Sexton, Nikko Locastro, Jordan Castro. Every player on this card has a significant following and this would prove to be the closest card. As the card entered the final seven holes, all players were within two strokes. Ricky Wysocki, perhaps pushing too hard, would drive OB on hole 17, ending his hopes of a Tour Championship to join his Points Championship. Jordan Castro would hang with Nate and Nikko, but in the end would fall one short. Nate Sexton, hitting his 20 footer on 18, would beat Nikko by one, while Nikko was left to sweat it out and see if his -9 was good enough to make the wildcard.
Semifinals Card 2: Cale Leiviska, Alex Geisinger, Paul Ulibarri, James “Snappy” Cole. Through the first five holes, Snappy was three ahead of Cale and even farther ahead of Alex and Uli. Cale birdied 8 of the next 11 holes and, on hole 16, reeled it back to a tie. On hole 17, disaster struck for Cale as his drive went OB and he missed the Circle 2 putt to save the par. Snappy carded the birdie and just like that, the lead was back to two. On the final hole, Snappy drove OB while Cale crushed a drive and upshot, giving himself a 15 footer for birdie. Snappy’s approach put him 22′ out to save his par and beat Cale by one. His strong putt sailed high, hitting the band, and it would take two playoffs holes before Snappy could finally breathe a sigh of relief. On the second playoff hole, Snappy carded the birdie and punched his ticket to the Finals.
Semifinals Card 3: Nate Doss, James Conrad, Drew Gibson, Peter McBride. Through the first nine holes, Gibson and McBride were five down and were on pace for card winner and wildcard. Through the last nine holes, McBride would card eight birdies and finish one off the course record. Peter McBride was headed to the Finals. All that remained to be seen was if Doss or Gibson could tie or best Nikko’s nine down for the wild card spot. Doss was ten down, one better than Nikko, going into hole 18. An OB drive and a missed Circle 1 putt later and Doss and Nikko were tied at nine down. Gibson meanwhile was nine down going into hole 18. Three OB shots later, Drew found himself five down and out of contention.
Semifinals Card 4: Paul McBeth, Michael Johansen, Cam Todd, Dana Vicich. Through 15 holes, McBeth was 7 down, Michael Jo and Dana were 6 down and Cam Todd was 5 down. With three holes left, it really was anybody’s card to win and it was clear that no one would catch the nine down figure to grab a tie for the wild card. On Card 4, it was win or go home. McBeth and Dana birdied 16 and essentially quickly whittled it to a two man race. On hole 17, with McBeth’s drive 32 feet away, Dana Vicich chained out for the ace . They would both birdie and Dana’s drive OB ended any hope that he had for a dramatic upset.
Wildcard: On the first playoff hole for the wild card, Nate would repeat his finishing hole of the round, driving OB and carding a bogey. Nikko got the par and claimed the wild card spot in the Finals.
In the Finals, Peter McBride continued his hot play going four down through the first six holes. The difference in the Finals however, is that this was only good enough to maintain a tie with McBeth, Locastro and Snappy. From that point on, the wheels would fall off for McBride and Snappy as they would lose five strokes over the next five holes. With Sexton carding three bogeys on the front nine, his day was all but over quickly too.
It was a two man race, with Nikko bogeying holes 8 & 9 and falling three behind McBeth. Nikko rolled off six straight birdies but only gained one stroke on the unflappable McBeth. Then, on hole 16, two down, Nikko paused on the tee . He had three holes remaining. He needed to gain two strokes on the hottest player on tour. He decided that this was his moment and he went for the green and the 500+’ uphill shot. He came up short and it was all but over. Nikko would thrill us one last time with his 700′ drive on hole 18 , finding its way to Circle 2, but it would not be enough and Paul McBeth, carding birdies on 14 holes with no bogeys found himself Tour Champion and took home not only the DGPT Ring, and the $10,000 check (which was donated to his cousin’s GoFundMe cause), he also shot a new course record. He chose a good time to do it.
That’s a wrap folks. We look forward to seeing you on tour next year. Thanks for tuning in.